Small- and medium-scale farmers from around the world have united as the delegation of La Via Campesina at COP27 to challenge the dominating corporate interests present at the event and demand a reduction in industrial agricultural emissions through a transition to agroecology.

Peasant farmers, who are on the frontline of devastation caused by crop loss, drought, floods and other effects of climate change, insist that an agroecological transition to more sustainable peasant farming models is the only way to ensure climate justice, food sovereignty and the end of the food crisis. This model is in direct contrast with the current status quo we see at work in international spaces like COP27, where corporate interests continue to set the agenda and proposed climate actions neither support small-scale farmers nor sufficiently address climate issues.

In various speaking engagements throughout COP27, the delegation of small-scale farmers from LVC has criticised the current power balances that allow companies and governments to profit from grabbing land, water and resources. LVC and ECVC continue to reject the false solutions that are being perpetrated in COP spaces, such as carbon markets, precision agriculture and GMOs. These practices will allow industrial actors to continue behaviours that negatively impact climate, despite the growing levels of death, displacement and destruction this is causing to the most vulnerable sectors of the population. 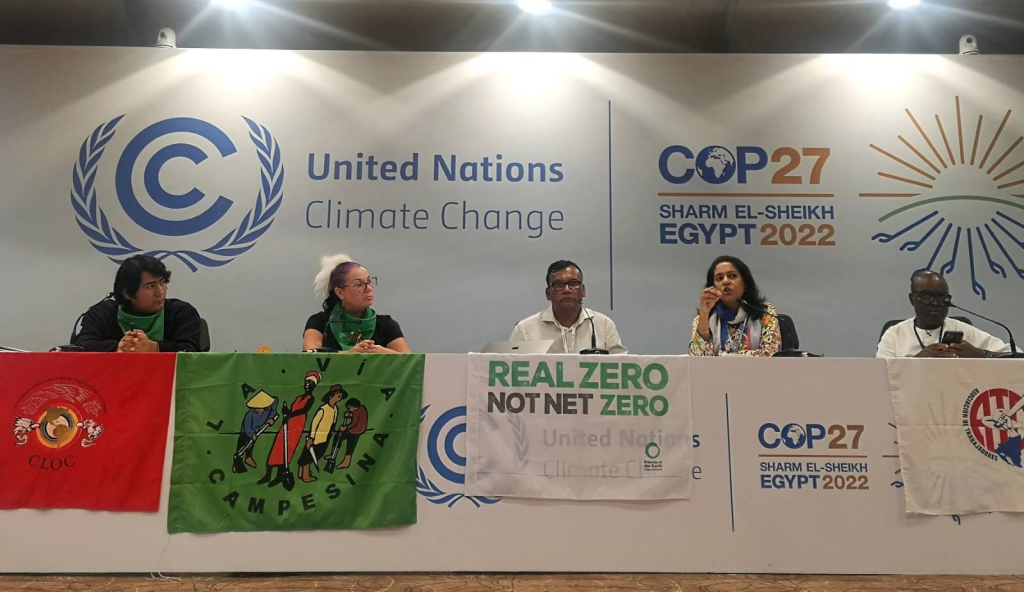 Instead, the LVC delegation has underlined how a transition to peasant agroecology – a holistic approach to farming that works with nature and not against it, based on biodiversity, synergies between different plant and animal species, mixed farming and peasant-led innovation, to produce food that is accessible to all – offers real alternative solutions to the major environmental, social, economic and political challenges we are facing today.

In a European context, studies[1] prove agroecology can produce enough food to feed the EU population, whilst moving away from the use of pesticides and chemical fertilizers, improving soil and water quality and ending the climate and social injustices that our current food systems are built on. However, this transition must be implemented through public policy to support existing agroecological farmers and make transition possible for those farmers who are trapped in agroindustrial models by the current status quo.

For ECVC and AbL member and LVC delegate in Egypt, Xenia Brand, EU institutions and European countries must start challenging this status quo in order to find climate solutions, putting farmers at the heart of the process. “COP27 was meant to be a space of action and implementation. One and a half days before the end, this implementation is nowhere in sight. So far, neither farming nor farmers are even mentioned in the draft of the cover text, there is just a single line on the food crisis. This is unacceptable. We demand food sovereignty, climate justice and this must include farmers and peasant agroecology at the forefront.”

Next week, in anticipation of the Carbon Removal Certification Framework communication by the European Commission on 30 November, ECVC will launch a manifesto outlining exactly how and why alternative climate solutions can be implemented based on peasant agroecology and climate justice.

Member of AbL and ECVC